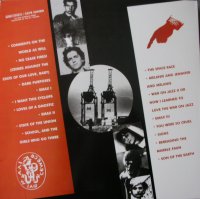 Last summer I spent a lot of time listening to Destroyer’s City of Daughters. I only had it on vinyl and it lived exclusively on my turntable for the better part of two or three months. I would listen to it on repeat for hours, drinking beer at my tiny kitchen table, soaking in the humidity of a Saturday afternoon in Little Italy.

I refused to listen to it in any other format, because the record had become so personal to me, I needed that tactility of flipping over the record and the intimacy of only listening to it alone in my apartment.

Finally I moved to Cambridge last December, marking the end of that strange, lonely period of my life, and decided I could move on, that the quality of the album demanded that I have it available on my iPod if I needed it on the subway. I was listening to it digitally for the first time, and I was startled when I heard “The Space Race” immediately after “No Cease Fires!” I had been trained through countless listens to know that “The Space Race” begins side B of the album, with that abrupt opening. I thought for sure my iPod was just fucking up again, but when I came home I realized “The Space Race” was actually tagged as track 3.

I wondered how this could have happened, so I looked up tracklists online. As it turns out, both MusicBrainz’ entry and even Merge Records’ own Destroyer catalog list “The Space Race” as track 3. Which means there are two possibilities: either the Merge site was used as a reference for poorly-tagged mp3s, or the CD release actually sports a different track order. My money’s on the former, so re-tag your files and hear it the way it was supposed to be heard.

And here‘s a hi-res picture of the cover art, a slightly out-of-focus one, but, as far as I can tell, the only decent one available online.